Description
Facture: Areas of a darker patina on both bronzes have been rubbed to reveal traces of the original golden and reddish lacquers applied to the coppery bronze metal from which they are cast.
The base of Lion Attacking a Horse is integrally cast with the horse’s body and the lion’s head, shoulders and back lower legs. Cast separately are the horse’s head, its three legs, the lion’s lower body and haunches.
The naturalistic base of Lion Attacking a Bull is separately cast and the group is bolted onto it. The legs and head of the bull and the lower body and back legs of the lion are all separately cast from the rest of the group.


Lion attacking horse is based on a Hellenistic marble which had been discovered in Rome by 1347; only the torso of the horse and the upper body of the lion remained and it was not until 1594 that Ruggiero Bescapè, a Milanese sculptor, restored the missing limbs and recreated the group according to his own invention1. Giambologna chose to complete the composition in a more dynamic way and the arched neck and backward turn of the horse’s head in his version – seen in the present group – differ from Bescapè’s group.2 Giambologna would have seen the fragmentary Hellenistic group when he visited Rome in the early 1550s as a student of antiquity and was in Rome again on two occasions in the 1580s.
Giambologna’s original small-scale model probably dates from one of these later visits to Rome in the 1580s and the model for Lion attacking bull was presumably created as a pendant after his return to Florence. The earliest recorded date for Lion attacking horse paired with Lion attacking bull is 1611, when Philip Hainhofer described ‘un gruppo d’un lione ch’ammaza un cavallo’ and ‘un gruppo d’un lione ch’uccide un toro’ as being amongst the bronzes by Giambologna owned by the imperial councilor Markus Zeh in Augsburg.3 The whereabouts of those particular bronzes is no longer known, nor of the two bronzes listed in the 2 November 1623 inventory of Cardinal Ludovico Ludovisi in Rome.4 The only surviving casts whose contemporary dating is certain are two pairs signed by Antonio Susini (who died 1624).5 One pair is now in Palazzo Corsini, Rome (formerly in Palazzo Venezia, F.N. 171-172).
Of the second pair, Lion attacking bull was bought by Louis XIV in 1663 (Louvre, OA 6062)6 and Lion attacking horse is in the Detroit Institute of Arts (25.20). Susini was one of Giambologna’s closest collaborators and a craftsman famous for the high-quality bronze replicas which he cast from Giambologna’s models (and which he continued to cast after setting up his own workshop circa 1600). The present pair of bronzes may have been cast in Paris rather than in Florence, although there is still insufficient scientific analysis available to distinguish with certainty between the casting techniques of the two centres. The heavier-than-usual casts and the finish of the bronzes would, however, be consistent with a French origin and a similarly constructed pair of bronzes in Hamburg has also been assigned a French origin.7 There were Florentine casts in Parisian collections during the first half of the 17th century and moulds taken from these bronzes would have enabled French founders to replicate the compositions. Cardinal de Richelieu (died 1643), chief minister to Louis XIII, is known to have owned a pair similar to the present compositions8 and Jean-Baptiste de Bretagne (died 1650), the king’s commissaire des guerres, owned a bronze of ‘le Combat du cheval et du lion’ (but not of the bull group)9. In addition to the single Lion attacking bull signed by Susini which Louis XIV acquired in 1663, there was a pair of the present compositions in the king’s collection by 20 March 1684, on which date they were entered as numbers 149 and 150 in an inventory of the bronzes recently moved to Versailles.10 François Girardon (1628-1715) also owned 'deux groupes de bronze de combats d’animaux'.11
The presence of these bronzes in France in the 17th century demonstrates that the models were readily available to local foundrymen working in Paris. 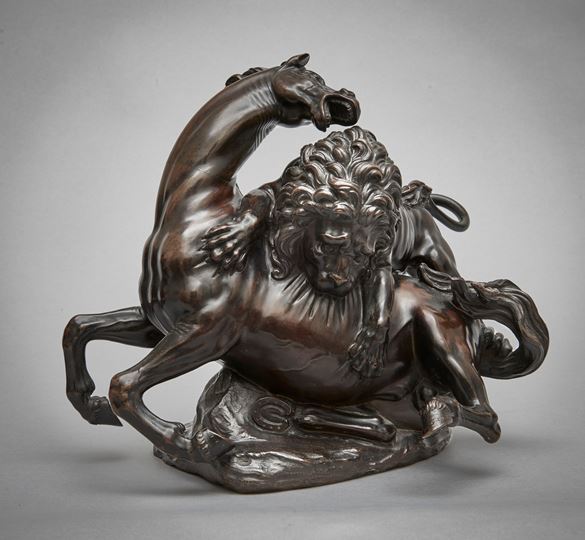 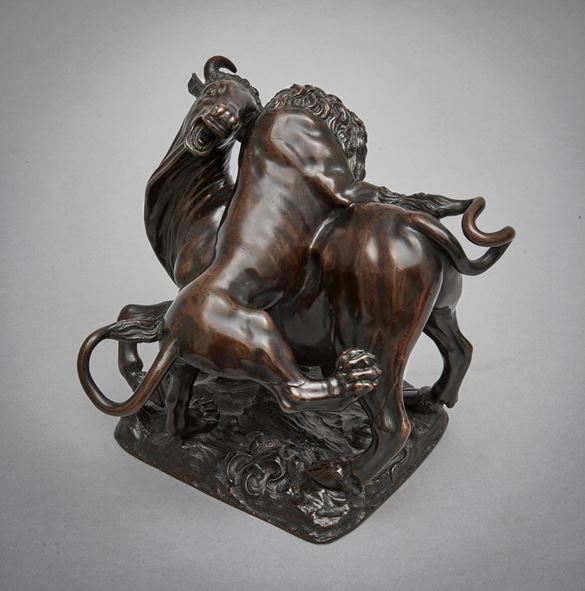 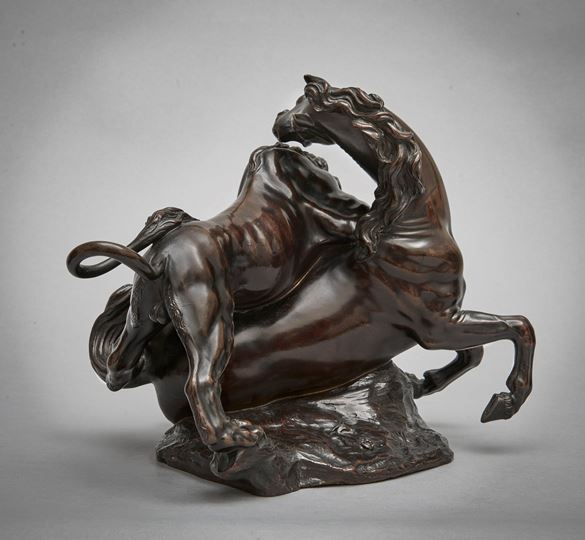 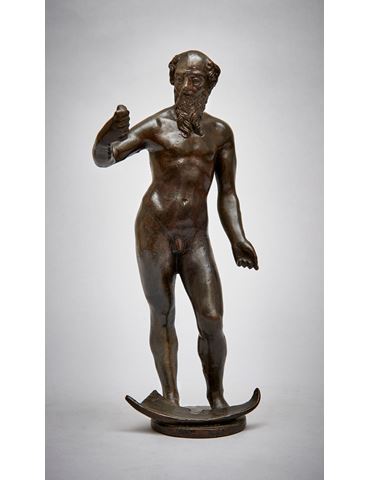