Facture:
A fire gilt, thin walled lost wax cast, the base metal having a high copper content. The surface of the bronze is lightly wire brushed and the highly defined surface detail was mainly modeled in the wax.

Reclining and partially draped, Apollo here evokes the similar pose of the antique marble figure representing the River God Tigris in the Musei Vaticani, Rome. The exact origins of this marble and of its restoration are obscure,1 though it seems to have arrived at the Belvedere either under Pope Julius II (1503-13) or Clement VII (1523-34).2 By the time that Maarten van Heemskerck drew it during his visit to Italy of 1532-36/7,3 it had been restored to its present appearance and was functioning as part of a fountain,4 said by Vasari to have been designed by Michelangelo.5 The River God’s left arm is bent to support him, while his right elbow rests on his upper thigh and his right forearm is raised slightly to hold an urn on his leg just above the knee.
Reclining in the opposite direction, the present Apollo rests the hand of his raised left arm on top of his lyre, balanced vertically on his upper thigh. His right elbow rests on a tree stump, while his extended hand languidly fondles his quiver. His eyes gaze upwards as he looks over his right shoulder. His right knee is raised and his feet are crossed at the ankles. He wears elaborately strapped sandals all’antica that extend half way up his calves.

Apollo’s pose reappears in reverse in a drawing in Princeton, The Art Museum (inv. 44.263) of a Young Woman Reclining Holding a Spherical Object attributed to Marcantonio Raimondi c. 1501-03.6 This drawing resembles the Apollo in a number of details, such as the manner in which the locks of hair curl and fall to the shoulders, the form of the straps on the sandals and the crevice-like folds of the drapery beneath the legs. Her languid expression and the gesture of her left hand almost mirror Apollo. The drawing persuasively evokes the appearance of the now missing pendant to the present bronze, thus indicating that the figure represented is most likely Venus.7 While Wendy Steadman Sheard has proposed that the “spherical object” held by the Young Woman Reclining … might be a water jug, it would seem more probable that it instead represents the moon, one of the attributes of Apollo’s twin sister Artemis, also known as Diana.
The form of the present statuette indicates that it was intended to adorn a piece of furniture, and gilt bronzes are known to have been used in this way in Italy as early as the mid-sixteenth century. A cabinet bearing the emblem of Philip II of Spain, signed and dated “IOANES GIAMIN FECIT IN ROMA 1561”, is surmounted by a pair of gilt bronze reclining male figures on the scrolled pediment.8 Furniture makers in Milan and Brescia collaborated with local armourers such as Lucio Piccinino to produce fine cabinets that were exquisitely decorated with damascene in gold and silver and iron, and these prestigious objects often also bore gilt bronzes.9 Such a stipo, with gilt bronze figures placed in niches on the cabinet, now in the Victoria and Albert Museum, is dated to the second half of the sixteenth century.[iii] Reclining gilt bronze figures are also to be found on top of another stipo in the Kunsthistorisches Museum in Vienna, signed and dated by Giuseppe de Vico in 1567.10 The finest such surviving Roman cabinet, created for Pope Sixtus V in about 1585, is the magnificent Sixtus Cabinet at Stourhead, Wiltshire.11 Made of ebony, it is adorned with many pietra dura plaques and gilt bronze statuettes and appliqués. It was bought in Rome by Henry Hoare and is recorded in an inventory of Stourhead of 1754.12

The Apollo is most likely to have been made by an artist familiar with antique sculpture recently unearthed in Rome, as well as the modern techniques of bronze casting and gilding that were being developed in northern Italy.13 The present statuette bears a pronounced resemblance in some details to a small gilt bronze figure of Paris in the Rhode Island School of Design, described as sixteenth-century, North Italian.14 These include the modeling of the body, the distinctive definition of the aureoles around the nipples and similar sandals. Although they are evidently not by the same hand, the sculptor of the Apollo was clearly influenced by north Italian bronzisti working at that time.15

More closely related however, particularly in facture, are some casts of a Seated Hercules by the “Ciechanowiecki Master” who was probably active in Rome in the late sixteenth century.16 A particularly fine example of the Seated Hercules in the Quentin Collection is, like the present Apollo, also thinly cast and very finely tooled, and the base is similarly highly worked. While the Seated Hercules and the Apollo were not necessarily created by the same sculptor, or even at the same time, it does appear that they were cast by workshops using very similar methods of production and finishing. 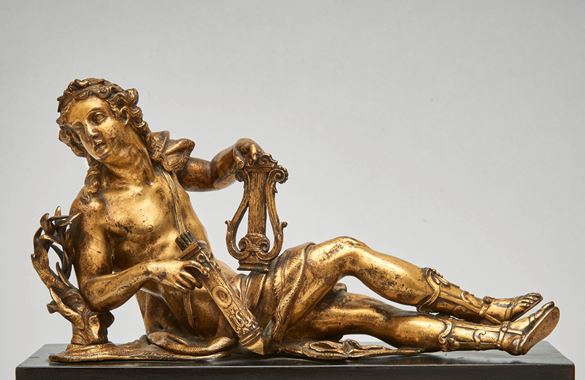 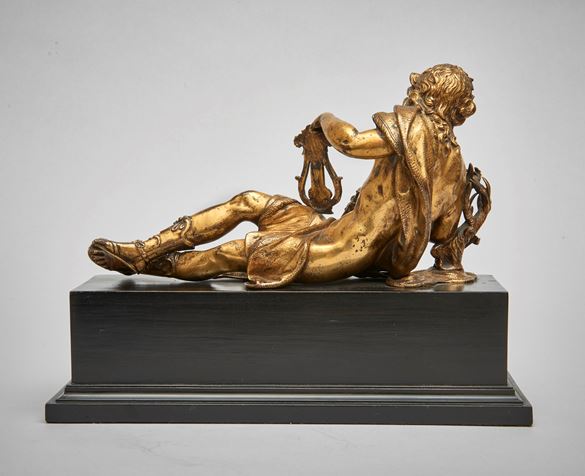 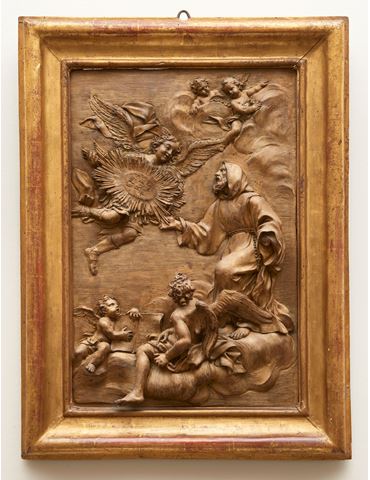