Facture: Sculpted fully in the round, the bust is hollowed out from the underside. The terracotta surface has been painted to resemble bronze but nonetheless retains the freshness of the modelling and original surface working. There is a minor restoration to the back of the bust.


This bust of Jupiter resembles a number of terracotta busts of mythological subjects associated with a signed example of Omphale1 and its pendant Hercules2. This pairing recalls the three years that Hercules endured as Omphale’s slave as punishment for having murdered his friend, Iphitus. The versions of these two busts in Malines [Mechelen], Stedelijk Museum Hof van Busleyden, were acquired in 1840 upon the death of Lodewijk-Jozef Faydherbe: Lucas’s last surviving descendant who had lived in the house built by Faydherbe’s son, Jan Lucas (1654-1704).3 In these vivacious portrayals, Jupiter and Hercules are depicted with a high degree of naturalism: the contours of their faces, their high cheek-bones, their protuberant lips and the gathered locks of their beards are very freshly modelled and detailed. In both busts, the right breast is partially exposed, revealing the nipple and the hair around it. In the case of Hercules, the hair is only apparent in the example in London, in which the modelling is clearer because it has not been covered with a layer of slip.4 In both busts, the upper left arm is covered by drapery, while the right shoulders are bare, albeit only partially in the Hercules. Among Faydherbe’s other surviving mythological subjects,5 a bust of Bacchus in a private collection in Western Flanders displays similar working of the surface of the terracotta.6 Both the Bacchus and Jupiter adopt the technique of drapery that overhangs the truncation of the bust at the front to conceal the integral base. The Bacchus was among a number of Faydherbe’s works which remained in the house in op den Bruul, Mechelen after 1840, subsequently passing into the hands of Emile de Meester de Ravestein7. A terracotta Bacchante in the same private collection is considered its pendant, but it is stylistically dissimilar to the Bacchus and Faydherbe’s known oeuvre.8 These two busts again differ stylistically from another terracotta bust of Bacchus in the Rubenshuis, Antwerp, which has also been attributed to Faydherbe.9 This more animated portrayal of Bacchus is reminiscent of the Jupiter, which it resembles in the modelling of the beard and the surface-treatment. However the rendition of Bacchus’ exaggerated pectoral muscles is quite unlike the more natural depiction of Jupiter’s torso. The present Jupiter also bears comparison with Faydherbe’s life-size marble of St Jacob in the Cathedral of Sts Michiel and Gudule in Brussels.10 St Jacob’s expressive face, his deep eye-sockets, high cheek-bones and the great locks of his hair and beard all recall our bust. The broad parallel folds of drapery that sweep over St Jacob’s shoulder and across his torso are also seen in the bust of Jupiter. The portrait of Gaspar de Craeyer, ascribed by Frits Scholten to Faydherbe, provides further evidence endorsing the attribution of the present bust of Jupiter to him.11 However, the fresh, pristine surface of Jupiter distinguishes it from the de Craeyer portrait, which is considerably abraded. In both of these busts, the thick locks of their hair are layered, and the individual strands are defined within each curl. The drapery is modelled in broad fluid folds around their torsos and hangs just below the truncation of the busts, partially covering their integral bases. The lively eyes of both Jupiter and de Craeyer are also similarly modelled: in the Jupiter, a small segment of the terracotta, in the centre of the eye, emerges from the left side of the iris to denote the pupil; whereas in the de Craeyer, the pupils are represented by a square wedge of terracotta attached to the inner front edge of his upper eyelid.12 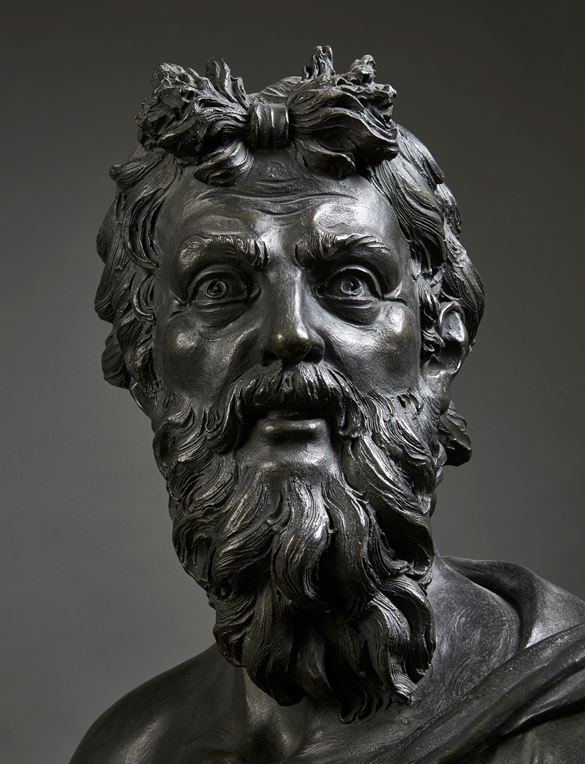 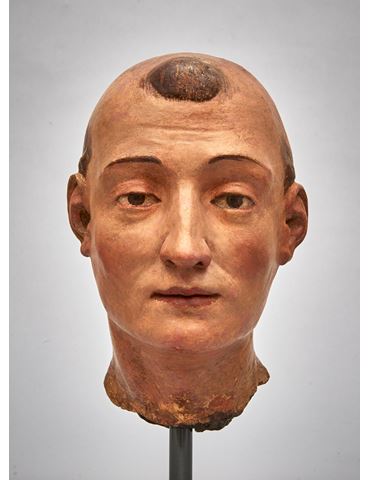